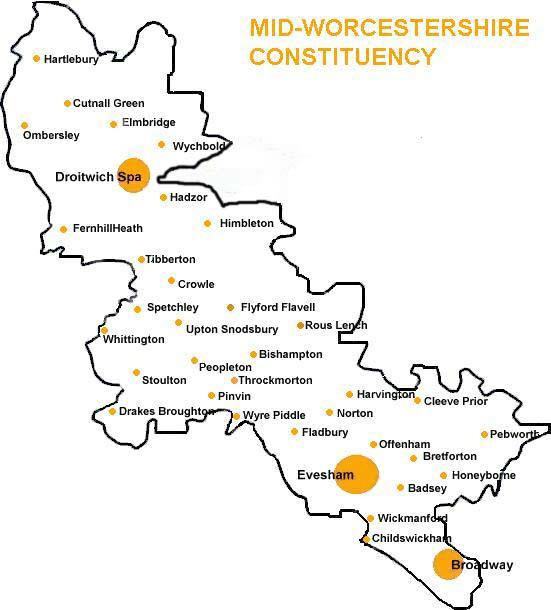 Pershore and the Bredon Hill communities in the south and west, and the Inkberrow County Division in the north.  Currently the constituency electorate is 74,949.

The constituency includes the two towns of Droitwich Spa (population 23,504) and Evesham (population 23,428) and 63 rural parishes. The area stretches from Hartlebury near Kidderminster in the north west to Broadway at the edge of the Cotswolds in the south east.

Historically the constituency has a liberal tradition in line with its neighbours in West Worcestershire and Stratford-upon-Avon.  John Corbett, the ‘Salt King’, was Liberal MP for Droitwich Borough from 1874 until 1892.

THE PEOPLE AND ECONOMY

Both Droitwich and Evesham have seen major expansion over the past 30 years.  Although 57% of Wychavon residents worked within the district in 2001, and a further 18% worked within Worcestershire, 25% commute further afield as the district is convenient for the Birmingham and Cheltenham/Gloucester conurbations.  The average household income is £37,634 whereas the average in the West Midlands is £34,000. Unemployment is currently 1.7% compared with 4.6% in the West Midlands and 3.5% in England.  However there are some pockets of deprivation in areas of the towns and some villages.

The constituency is the location for some large businesses, particularly firms operating as major suppliers to supermarkets, growing, importing and distributing produce.  Agriculture and horticulture are still important economic activities.  Tourism is growing in importance, particularly in the south east with the nearness of Stratford, the Cotswolds and the Avon and Severn valleys.  The £12m restoration of the Droitwich Canals completed in 2011 has opened up a unique 21 mile cruising ring attracting visitors to Droitwich and the nearby villages.

The percentage of residents in the Wychavon District born in the UK remains higher than the national average.  94.8% of residents were born in the UK, 2.9% elsewhere in the EU and 2.3% were born in other countries (2011 census).  However there has been a significant growth in the number of migrants from the European Union (7,110 between 2001 and 2012) who are largely employed in the horticultural sector and the distribution centres in both towns.