Margaret Rowley has been selected by the Mid Worcestershire Liberal Democrats as their Prospective Parliamentary Candidate in the General Election On May 7th.

Margaret has lived in Tibberton near Droitwich Spa for 25 years and her three children attended local schools.  She works as a manager for the NHS in Worcestershire and has been a councillor on Wychavon District Council for 20 years.

She chaired Droitwich Canals Trust for 10 years, leading the successful campaign for their restoration.  Since they were fully restored in 2011, she has continued to support the canals as vice chair of both the Droitwich Waterways (Pamela May)Trust and the Worcester-Birmingham and Droitwich Canals Society.

A former board member of Droitwich Spa and Rural Housing Association, she is now a director of the Tibberton Community Land Trust which is working towards providing affordable housing, a new village hall and allotments in Tibberton.

As a councillor, Margaret has campaigned for the restoration of the Droitwich Lido, to reduce motorway noise, provide adequate flood alleviation measures and has successfully taken up many issues on behalf of residents.

A former chair of Wychavon’s Environment Committee, Margaret has been leader of the opposition on the Council for 16 years.  She chaired the Council’s Post Office working group and successfully campaigned to save local post offices. More recently she led a successful bid to provide faster broadband in the ‘Redditch Arc’ of villages between Worcester and Redditch where speeds had previously been under 2 mbps.

Margaret was parliamentary candidate for Mid Worcestershire in 2005 and 2010, increasing the Liberal Democrat vote both times, from 18.8% in 2001 to 23.4% in 2010 when she was runner up to the Conservatives with Labour coming third with 14.9% of the vote. 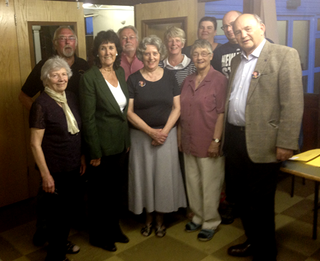